The History of Guggisberg Cheese. 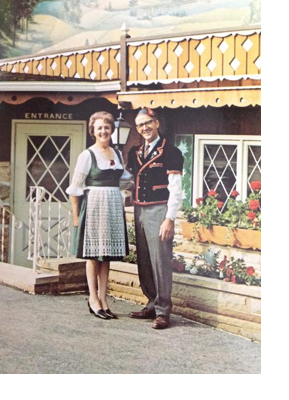 took an interest in cheese-making at a very young age. He was only sixteen when he began to study the art of cheese making in the high pastures of the Alps in his home land of Switzerland. He went on to attend the famous Swiss Federal “Molkereishulle” (cheese maker’s institute) to further improve upon his craft. Upon completing his schooling, Alfred spent a number of years making cheese throughout Europe and parts of Africa before coming over to the United States in 1947 in search of a new challenge. It didn’t take long, with his high standard of quality, for Alfred to earn a reputation as an exceptional cheese maker. As a result of his abilities, Alfred was sought-after by Amish farmers in Holmes County, Ohio, who were in search of a cheese maker to provide a market for their milk. The operation that Alfred took over, known then as Doughty Valley Cheese, evolved and became Guggisberg Cheese in 1950.

In the 1960s, after having sufficient time to experiment with the local milk, Alfred was able to develop a new style of Swiss. His objective in doing so was to come up with a taste that was more favorable to the less-developed American palate. The main differences with this cheese were that it featured smaller “eyes” (holes) and had a creamier taste. Alfred’s wife, Margaret Guggisberg, christened the new cheese “Baby Swiss” after she saw a wheel of it next to the much larger wheel of traditional Emmental Swiss.

Guggisberg Baby Swiss Cheese was launched and Alfred’s cheese house began producing larger quantities of Baby Swiss wheels for the local community. While still in this early stage, Margaret, being the assertive woman that she is, decided to approach the local supermarket (Buehler’s) with some of Alfred’s new cheese. Buehler’s agreed to take in some of this cheese and, within a month, found that it was a good seller and reordered in larger quantities. This relationship helped propel Baby Swiss into popularity, and Buehler’s is still a regular customer today.

With Baby Swiss starting to become an established product, competitors began coming out with their own imitations of the cheese. Their problem was, they didn’t have that secret Guggisberg family recipe, and, as the old adage goes… often imitated, never duplicated! Guggisberg is the original Baby Swiss and the taste has yet to be mirrored by any of its competition.

A longtime dream of Margaret's became a reality in 1983, with the opening of the Chalet in the Valley Restaurant. Served there are the authentic Swiss and Austrian cuisines. The restaurant is built in the style of a Swiss Chalet and overlooks the scenic Doughty Valley. Margaret Guggisberg supervised the operation when it opened, and continued to play a key role in daily functions up until her passing in 2015. Many of her original recipes are still used today.

Alfred passed away in 1985, and his son, Richard Guggisberg, is now president. Under Richard’s leadership, the company has grown into one of the larger manufacturers of Swiss cheese in the US, and one of the biggest cheese manufacturers of any sort in all of Ohio. Guggisberg sells to retail and wholesale customers all over the continental United States and Europe.

In 1995, Guggisberg Cheese purchased a facility in Sugarcreek, Ohio. The factory was completely remodeled and old equipment was replaced with state-of-the-art technology. The facility produces a substantially higher volume compared to the Doughty Valley Plant.

Guggisberg is constantly advancing and maturing as a company, as their growing list of accolades demonstrates. Guggisberg Baby Swiss was awarded #1 Cheese in America as the 2019 United States Grand Champion at the U.S. Championship Cheese Contest. Along with first place in the Baby Swiss category, Guggisberg took first, second, and third places in the Swiss category with their Premium Swiss. Guggisberg Cheese also currently holds 2nd place Swiss in the World Championship, and is the reigning Ohio Grand Champion Cheesemaker.

Guggisberg attributes their success to upholding their long-standing traditions of superior quality, authenticity, dedicated employees, and a genuine concern for their customers’ satisfaction.

Here are some pictures of the beautiful garden located beside the cheese factory.

And here are a few of Richard and Guggisberg Awards!